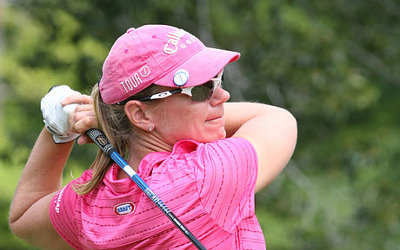 The retired Swedish golfer is widely considered the best female golfer of all times. In a little more than 15 years as long as she played golf professionally, she won 93 international events and went into history as a female golf player with most professional wins. She also holds the record in earnings (more than $22 millions), the number of the Player of the Year awards (8 in total), the number of the Vare Trophies (6 in total) and the lowest seasonal scoring average. She is also the only female golf player with a shot of 59 and the first female golfer to play at a PGA Tour event since 1945 (she appeared at the 2003 Bank of America Colonial).

Sorenstam was born in 1970 in Bro near the Swedish capital of Stockholm. She was an all-round athlete during early childhood and trained a number of sports including tennis, soccer and skying. She began playing golf at the age of 12 and shared her first club set with her sister Charlotta who is also a professional golf player and a coach at Annika’s golf academy. In 1991, Sorenstam moved to the United States to study at the University of Arizona. While studying, she played collegiate golf and became first “freshman” and the first non-American to win the NCAA Championship.

The Swedish golfer turned professional in 1992. She failed to win a LPGA Tour card at the Final Qualifying Tournament and as a result, she began her career as a professional golfer on the Ladies European Tour (LET). One year later, she played at three LPGA Tour events. Her first professional win, however, was the ALPG Tour’s Holden Women’s Australian Open in 1994.

Sorenstam began her rise to the top in 1995 when she won her first LPGA Tour event by winning the US Women’s Open. In the same year, she also became the No. 1 on the Money List and the first non-American to win the Vare Trophy. By winning the Australian Ladies Masters and two LET events, she also finished No. 1 on the LET Order of Merit, becoming the first golfer to be at the top of both money lists.

From the mid-1990s to the mid-2000s, Sorenstam dominated ladies’ golf. But she also found time for other activities such as helping to design these golf clubs by Mizuno and in the later years of her professional golf career, she began combining golf with entrepreneurship. She retired from competitive golf after the end of the 2008 season but the sport continues to play an important role in her life. Among other things, Sorenstam also owns a golf academy (under the name ANNIKA).