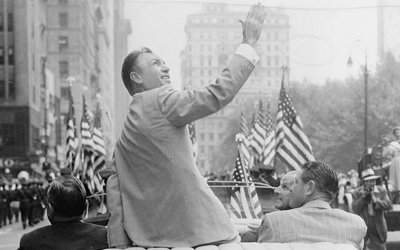 The American golfer didn’t only went into history as one of the greatest golfers of all times but he also profoundly influenced the game itself. He is still remembered for his outstanding ball-striking skill and his theory of swing which according to Hogan, requires lots of practice. Thus he is also often said to invent practice. In his professional career which lasted more than four decades, Hogan won 9 major championships and is also one of only five golfers to win all four major championships. Hogan remains the only golf player to win the US Open, the Masters and The Open in the same calendar year.

Hogan was born in 1912 in Stephenville, Texas as the youngest child of Chester and Clara Hogan. When he was 9 years old, his father committed suicide which forced him and his siblings to work in order to help their mother get through the month. According to some accounts, young Hogan saw his father killing himself with a gun which is said to be the reason for his introverted personality. However, it remains uncertain whether these accounts are true or not.

At the age of 9, Hogan began selling newspapers after school to help his mother. Later, he began caddying at the Glen Garden Country Club and thus got involved in golf. During the last semester of his final year, he dropped out of high school and focused on professional golf. He turned professional in 1930, six months before turning 18.

Hogan’s professional golf career didn’t start smoothly and he achieved his first professional win as an individual only in 1940, a decade after turning professional. He was initially also forced to work as an assistant pro and then as head pro to earn enough money. And when his career finally took off, it was interrupted by the Second World War (Hogan served in the US Air Forces between 1943 and 1945). In 1948, he suffered a serious injury in a car crash and was told he might never be able to walk again and much less to play golf. However, he returned on the golf course in the late 1949 and in 1950, he re-joined the PGA Tour.

Until retiring from competitive golf in 1971, Hogan achieved 68 professional wins of which 64 were PGA Tour events. His most successful period was the 1953 season which came to be called as the “Hogan Slam” season since he won five of six tournaments and three majors, becoming the only golfer to win three majors in one year until 2000 when Tiger Woods won three major championships as well.

Hogan never played on the Senior PGA Tour (today’s Champions Tour) because it was established only in 1980 when he was already in his late 60s. He died in 1997, less than a month before his 85th birthday.