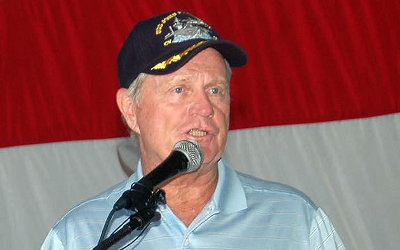 “The Golden Bear” as Jack Nicklaus is popularly called is widely considered as one of the best golfers in history. He holds a number of records including in the number of won major championships as no other golf player has managed to even himself with Nicklaus’ 18 majors. Nicklaus was focused on majors his entire professional career yet retired with 73 PGA Tour wins, at the time lagging behind only Sam Snead (he was later also beaten by Tiger Woods).

Nicklaus was born in 1940 in Columbus, Ohio to Charlie Nicklaus and his wife Helen. His father was a successful athlete who played semi-professional football for the Portsmouth Spartans. Young Nicklaus followed the footsteps of his father and competed in a variety of sports during his early life, including football, tennis, baseball, and track and field. He began playing golf only at the age of 10 and immediately showed talent for the sport. At the age of 12, Nicklaus became the Ohio State Junior champion and one year later he became the youngest golfer to qualify for the US Junior Amateur. At the age of 16, he won the Ohio Open and at the age of 18, he played his first PGA Tour event. One year later, he won his first US Amateur and repeated the success in 1961 when he also won the NCAA Championship, becoming the first golfer to win both events in a single year.

“The Golden Bear” turned professional in 1961. He initially planned to remain amateur but he realised he must compete against the best golfers to write history. His first professional win came only one year later when he defeated Arnold Palmer at the 1962 US Open. This win didn’t only mark the beginning of the rivalry between the two golfers but it also made Nicklaus the youngest golfer to win the US Open after the legendary Bobby Jones who won the tournament in 1923, aged only 21.

In 1963, Nicklaus won the Masters and the PGA Championship, and became the youngest winner of the Masters at the time and the third youngest golfer to win the PGA Championship. The success continued until 1967; he won the Masters in 1965 and 1965 (the first golfer in history to win the tournament two years in a row), the 1966 Open Championship and the 1967 US Open. After two years without a win, he went on winning another Open Championship in 1970 and by 1980, took nine more major championship titles. He won his last major in 1986 at the age of 46 and became the oldest golfer to do so. In 1990, he joined the Champions Tour and won 10 tournaments by 2005 when he retired from competitive golf.

Nicklaus has also been highly active off-course, most notably in golf course design and book writing. His golf design company which is among the largest ones in the world has helped designed many prominent golf courses across the globe, while his instructional golf books are widely considered as the best there is available. Nicklaus also runs his own PGA Tour event – the Memorial Tournament.