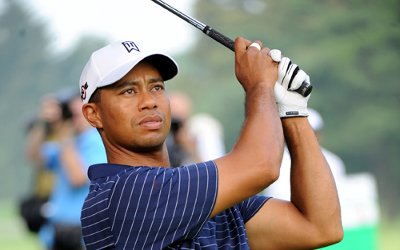 The current World No. 1, Tiger Woods, is one of the most successful golf players of all times. Since 1996 when he turned professional, he has broken a number of records and considering that he probably has many years of professional golf career, he will probably broke further records or at least even himself with the greatest golfers in history. To date, he has won 14 major championships (second only to Jack Nicklaus who has 18 majors) and 78 PGA Tour events (second only to Sam Snead).

Tiger Woods was born in 1975 in Cypress, California to Earl Woods and his wife Kutilda. He is their only child but he has two half-brothers and one half-sister. Tiger’s real name is Eldrick Tont. He was nicknamed Tiger after his father’s friend Colonel Vuong Dang Phong.

He grew up in Orange County and was introduced to the sport of golf before turning 2 by his father. Before he turned 7, he won the Under Age 10 – the Drive, Pitch and Putt in Cypress and at the age of 8, he won 9-10 boy’s event at the Junior World Golf Championships. When older, he went on winning six Junior World Championships. According to his father, Tiger won him the first time when he was 11 years old and never failed to win him ever since.

At the age of 15, Tiger became the youngest winner of the US Junior Championship at the time (his record was later beaten by Jim Liu) and defended the title of the champion in 1992, becoming the first golfer to do so. In the same year, he also played his first PGA Tour event. In 1993, he won his third US Junior Amateur Championship and became the only golfer to win the tournament three times to date. In 1994, he won the US Amateur Championship. Until 2008 when the tournament was won by young Danny Lee, Tiger held the record of the youngest US Amateur champion ever.

Tiger turned professional in August 1996. Within less than a year, he won his first major championship - the Masters and became the youngest winner of the tournament. By June 1997, he was No. 1 which is the fastest accent to the No. 1 ranking in history. He continued to excel and break records until the first half of 2008 when a knee surgery forced him to miss two months of the PGA Tour. He returned just before the US Open and went on winning the championship but he was forced to take a break again to allow his knee to heal properly.

A scandal provoked by his infidelity forced him to took another break soon after his return in 2009. He publicly apologised for his behaviour and said to take an indefinite break in order to focus on his marriage. He took up the club again in April 2010. But marital problems showed on his play and by November 2011, he dropped to No. 58. Tiger Woods became the World No. 1 again after winning the Arnold Palmer Invitational in March 2013.